A downloadable game for Windows, macOS, and Linux

JetHack is a first-person platformer about jetpacking around a cyberpunk city, hacking into and breaking mega-corporate advertisements. It was made for Global Game Jam 2018 with the theme of "Transmission".

Even though it’s very short, soaring over the city when you’re finished with your task gives a very satisfying sense of mastery. This city doesn’t belong to its corporations but to you, a small, flying disruptor who goes where they please and does what they want.

The background music is "Employment Hyper Agency" by Anonymous 420 from the Free Music Archive.

This is a pretty cool game jam submission.

Reply
The Magnet Boy4 years ago

I like it very much! The limitations on the jets sure gave me a challenge when I try to  boost from roof to roof, oh, and the game is VERY buggy. It's still fun tho :)

It's SO buggy haha Thank you so much for playing!

Reply
The Magnet Boy4 years ago

No need to thank me, thank YOU for making the game! :D

When I played, all but the last billboard stayed the same after hacking, and after hacking a terminal I could go back to it and it would show me what the next terminal would, if I hacked that and moved far enough away, I would apear at that terminal instead of the one I was just at.

Besides that it was good.

Quite a cool game i really liked the art, and the buildings.

and the cool quotes.
Reply
Monkeystein Studios4 years ago

I don't think I did a very good job at this game. I blame the wine though.

I really liked this game:

This was awesome! Sticking it to the man! In the future! With a jetpack! In a city of neon lights! Nothing negative to say about this at all! Thanks for making it.

Reply
The Hard Croc4 years ago

Grab your jetpack, it's time to stick it to the man!

I don't understand how to use the JetPack :/

I absolutly love games with actually hacking. I find it super immersive and immediatly puts it at the top of my list. My only complaint is that I wish it was longer, I just had so much fun playing it and following the story that I wish I could have experienced it awhile longer, losing myself in the universe of a jetpacking, hacking rebel! I did make a small gameplay video and if you got the chance to check it out I'd really appreciate it! In the meantime, I hope you consider continuing the game and if not then I'm very glad I got to be a part of the universe for a short while.

I absolutely loved both the movement and the hacking, the jet pack has a ton of weight behind it and while the hacking was just copying lines of text, the jokes made them worth it. The music and aesthetic were kick ass as well! (I know the music was from a CC archive, but it was a good choice)

Thank you for the kind words and for making a video! We're glad you agreed with our cyberpunk humor, bad puns and all.

I will say the jetpacking is a bit hard. The first time i fell away from the place and fell to limbo. (didn't put in my video) 2nd time better progress but, i feel once you fall and, respawn that's it. The hacking was funny and, cool.

Thank you so much for playing and making a video! The jetpacking is pretty hard at the moment, it's got a high "jank" factor. We forgot to tell people that you can hold Left Shift to sprint, which will let you go farther!

I really love the environment you created! I had a lot of fun wandering around on the rooftops in the sandbox you created. I would love to see this turned into a full project of some sort! I made a video of the game with some more thoughts on it. Keep up the great work!

Thank you so much for playing and making a video, and for your kind words! We focused most of the Global Game Jam weekend on making the environment something cool and trippy to be in, and we'd love to expand on it! If we do we'll make sure to let you know :) 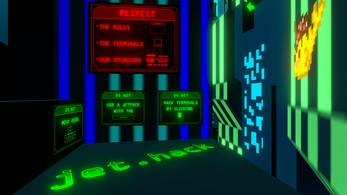